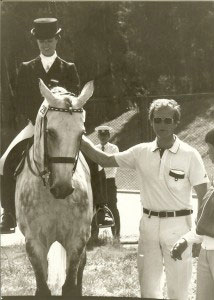 The number of Austria’s medalists at Olympic Games, which are mostly focusing winter sports in the alpine country, is limited. Any how one of them is Sissy Max-Theurer. She is the only Austrian, who won the gold medal in dressage – on the 1st of August 1980 in Moscow, at the so-called boycott games.

Sissy Max-Theurer: It is now more than 35 years ago, however I still have every moment exactly in mind: the ceremony, the hymn – the fantastic feeling of having succeeded. Although the at that time strongest competitors, as the Swiss Christine Stueckelberger and the Germans Dr. Reiner Klimke and Uwe Schulten-Baumer, did not compete in Moscow… 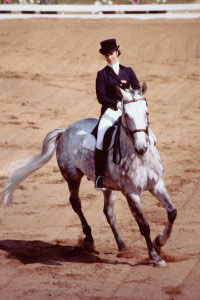 Nevertheless it was not a second class win, was it?
Sissy Max-Theurer: No, the victory was not just given to us. My competitors rode excellently – such as the fifth-placed Finn Kyra Kyrklund, who later became Vice World Champion. Together with my Mon
Cherie I managed to achieve a very good performance.

As you did in 1979, the year before, at the European Champion-ships?
Sissy Max-Theurer: Yes, then we could beat the favored Christine Stueckelberger on her Garnet and even the Germans. In the Olympic year, we were twice second at the CHIO Aachen – once behind Dr. Reiner Klimke, once behind Uwe Schulten-Baumer.

There has been a lot of discussion about the boycott of the Games by the US and its allies because of the invasion of the Russians in Afghanistan – what is your opinion about it?
Sissy Max-Theurer: Austria is a neutral country so at that time we could decide for ourselves – even though our presidents had already generated political pressure to cancel the participations. I am glad that I have been to Moscow. Many other athletes lost their deserved reward of years of training. It is even worse that today everybody knows about the unlucky American initiatives in the Afghanistan conflict – and about its continuing fatal effects on the peace in the world these days.

The Olympic victory of Mon Cherie was his last appearance in world championships, why?
Sissy Max-Theurer: Unfortunately Mon Cherie suffered from the socalled “grey cancer” and he had growing problems with breathing. At the age of ten we had to retire him from sport – he was the horse of my life. A gift – and in the beginning totally unrideable…

You have then continued your career with Acapulco, directed by your husband and riding master Hans Max-Theurer, haven’t you?
Sissy Max-Theurer: After the tenth place at the European Championships in 1983, we took eleventh place in 1984 at the Olympic Games in Los Angeles/USA.

Only eight years later, in 1992, you took part in your third Olympic Games?
Sissy Max-Theurer: Meanwhile I gave birth to our two children: In 1985 Victoria and Johannes in 1987. With Liechtenstein I then managed to celebrate my comeback. We ranked eighth in Barcelona in the individual final. After ranking twelfth at the World Cup in 1994 in Den Haag I finished my active career and from now on I gave all my support to my daughter’s ambitions in riding. 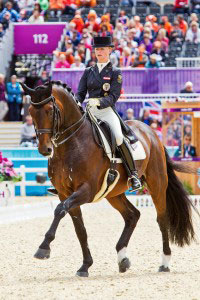 In 2004 you, Victoria Max-Theurer, took part in the Olympic Games for the first time. Was it something really special?
Vici Max-Theurer: The Olympic Games are probably the highest aim of every athlete. Even today, I am still pleased that this dream about Athenscame true for me so quickly.

Athens was special in many ways, wasn’t it?
Vici Max-Theurer: Yes, so for the first time after 20 years an Austrian team was again allowed to compete. It was Nina Stadlinger with Egalité, Peter Gmoser with Don Debussy, Fritz Gaulhofer with Meggle’s Werther’s Wels and me. We did qualify at the European Championships 2003 in British Hickstead. At that time I was 17 years-old and with my horse Weinrausch the youngest participant.

Also in Athens you were the youngest participant.
Vici Max-Theurer: Even the youngest ever, which by then had taken part in the Olympic Equestrian Games.

You have been able to qualify three horses: Weinrausch, Agrigento and Falcao?
Vici Max-Theurer: I decided to take Falcao with me, for the first time ever I rode a Grand Prix tour in November 2003.

And even this was a sensation.
Vici Max-Theurer: Yeah, right. When we discovered Falcao as a four-years-old, he was actually meant to be a horse for the junior tour. Therefore we have not expected, hat he carries me not only to six junior medals, but also to the 20th place in my first Olympic Games.

Four years later in Hong Kong you saddled Falcao again??
Vici Max-Theurer: Not only because of the hot and humid climate, with whom the always very motivated Falcao then cooperated very well.

But the more the problems he had with the scoreboard?
Vici Max-Theurer: Yes, unfortunately! That was really unlucky. Falcao could be very distracting. And so we did not reach our usual performance in the Grand Prix.

London 2012: You rode Augustin OLD.
Vici Max-Theurer: Augustin OLD, who had been bred by my mother, recommended himself with great successes. In the Olympic year he finished fourth in the Grand Prix Dressage of Aachen – with more than 80 percent.

In the Olympic freestyle final you ranked 13th.
Vici Max-Theurer: A result, I am very proud about. In the Grand Prix we had a few misunderstandings, but in the Special and in the freestyle test it was really very good.

This year, you now aim your fourth Olympic participation in a row.
Have you ever been in Rio de Janeiro?
Vici Max-Theurer: Yes, in 2011 with Eichendorff. However, in a different place than the Olympic competitions are going to be held. 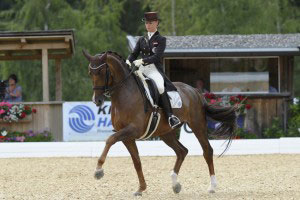 In Rio you will present us your Blind Date?
Vici Max-Theurer: I would not expect the long journey of the now 18 -years-old Eichendorff and of the colic-operated Augustin OLD. Blind Date had her European Championship premiere in 2015 in
Aachen, where she was scored 75.20 percent and she ranked tenth in the Grand Prix. Herewith she had already proven that she is a great championship horse.

You will compete as an individual athlete in Rio, won’t you?
Vici Max-Theurer: It is a pity that the Olympic qualification for Austria did not work out. But luckily I am not alone: my parents and my team will travel with me to Rio. Without their commitment my success would have never been possible. Therefore, at this point, my hearty and very big thank you.

After all we are looking back in the past: Which were your most amazing games?
Vici Max-Theurer: I do not have a ranking. Athens featured almost holiday atmosphere and we also were able to experience some of the other sports. Hong Kong was well organized and gave us great
insides in the Asian lifestyle. And finally London had a stunning audience and wonderful scenery. Now I am looking forward to Rio – and I hope “Beate” and me, we will be able to do our best.