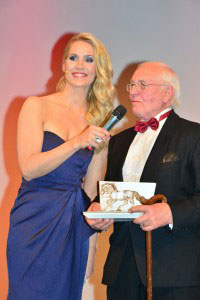 Klaus Philipp, the world’s most important painter of horses, has portrayed all legends, all four-legged equestrian heroes – thus also the most important horses of Bianca and Ulrich Kasselmann, who have not only been close friends of the artist for years, but also lovers of his art. They appreciate him for his multifaceted and sensitive style, spanning from impressionistic racing and tournament scenes via delicate studies of character to almost abstract, dynamic concepts with masterfully graduated scales and colour and air perspectives. They adore him for his magic oil and pastel works as well as for his tusche sketches interpreting his models’ personalities with virtuosity.

In 1989, our good friend and exceptional artist, Klaus Philipp, painted a special horse for my husband and me – the legendary Deister.

Deister showed up with catalogue number 95 at the so-called interim auction in Verden in November 1974 – presented by my husband Ulli, former auction rider under the direction of Auction Manager Hans Joachim Köhler. 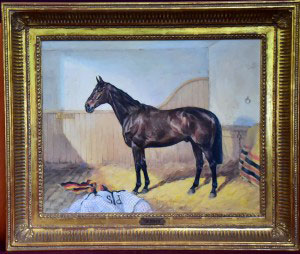 By bartering, Deister returned to us after the auction to win advanced level jumper classes with Ulli before we sold the five-year-old gelding to Hartwig Steenken. He soon came out first in a Grand Prix with the exceptional horse shortly afterwards who became a legend under Paul Schockemöhle later on.

Ulli and I met the first time during these years in Verden, and 15 years after Deister had been sold, we received this incredible painting from Klaus Philipp that has been adorning our house since 27 years now, constantly reminding us of one of the most important and successful jumpers of all times – and to some extent also of the time we first met. 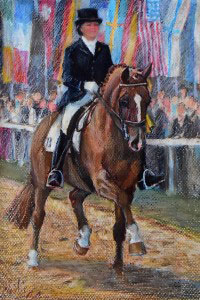 In 2007, Klaus Philipp presented another painting to me which indeed means a lot to me. The painting shows me and Welt Hit I O at the Federal Championships of four-year-old stallions we had won in 1995. Remembrances of an extraordinary stallion with whom I successfully competed up to Grand Prix-level. Welt Hit I O was not only a horse for me, he was just like my best friend. And I am even happier as thanks to Klaus Philipp, I remember this wonderful moment with an incredibly amazing horse every day anew.

I have known Klaus Philipp since the Verden auction times – he was always there and we always had a lot of fun. We never lost contact as we met at many tournaments such as the one hosted by the Haim-Swarovski-family. Thanks to his passion for Poland, he got on well with my groom Ella. He always tells her the story about his victory in Poland at the European Eventing Championships for journalists in the seventies. “He was fond of Polish vodka, Polish women and Polish event horses,” would be Ella’s description. Yes, he loves flirting which is certainly an excellent basis for funny evenings. And besides, I appreciate him as warm-hearted horse expert.