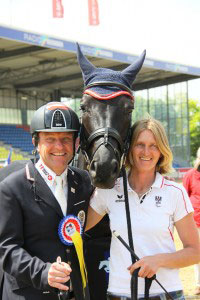 Austria’s para dressage team surprisingly ascertained a place at the Paralympic Games in Rio de Janeiro (September 7-18) at the end of January 2016! Pepo Puch, Olympic gold and bronze medallist in London 2012, and para dressage consultant Dr. Eva-Maria Bachinger are something like father and mother of that success. Both will be guests at the Austrian Championships on Schindlhof.

“I am extremely pleased that we – as a comparably small nation – have achieved team qualification for Rio. It is really amazing when you consider the nations we have left behind“, disclosed Pepo Puch, who is happy to be able to travel to the Paralympics in Brazil for the first time with a complete four–man team. Most recently the Styrian “Disabled Athlete of the Year” and para pioneer Thomas Haller represented Austria in London. Austria managed to easily retain third place among the top 7 in the FEI World Ranking of Para Dressage Teams with a score of 857 points (the aggregate of the two red-white-red top results from the Nations Cups at Arezzo/429,773 points and the Magna Racino/427,505) and thus ascertained qualification ahead of Norway, USA, Denmark and Australia.

The Grade 1b rider replied to the question about the secret of success: “Rio is the reward for good team work! Our para consultant Eva-Maria Bachinger and chef d’équipe Theres Rantner-Payer have set us on the right track with a lot of intuition and a good plan, plus the professional support of the Austrian Equestrian Federation, that realised the Para Cup, an important tournament series in Austria. The Paralympic Committee and the Rio Project also did a good job and helped us actively. I would like to thank everybody for what they did!”

Pepo Puch is the motor of the team
Eva-Maria Bachinger, the 5-star judge in para dressage and substitute judge in Rio, returns the compliment: “Pepo is the motor of the team; his ambition is catching and that’s why he is a great example for all. And there are the performances of Michael Knauder, who works very subtly and accurately with the horse and fortunately may ride the 20-year-old mare Contessa provided to our wheelchair user by the Fries family. Those two are our fixed Rio competitors in my opinion! But all others too, such as Julia Sciancalepore, Bernd Brugger, Jutta Rus-Machan and Thomas Haller, who represented Austria in the Nations Cups, have contributed to the success. I am very happy for our team and am very much looking forward to Rio!“

The countdown to the Paralympics
The intensive training camps and the individual show schedules of each team member adjusted exactly to Rio show how serious Austria’s para team is taking the preparations for the Paralympics. Chef d’équipe Theres Rantner-Payer – a fortunate mixture of occupational and riding therapist and certified dressage instructor, who manages the riding stables Gnadenwald at Terfens in the Tyrol – for instance organised a training camp with the emphasis on sitting to improve her pupils’ position on the horse. 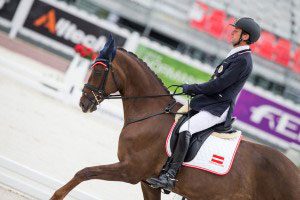 Pepo Puch, who qualified three horses for Rio – the successful mare Fine Feeling S, the gelding Fontainenoir and 7-year-old promising talent Dynamic Dream – has run through the journey to Rioup-front: “We were invited to Doha in March. We flew from Liège and thus could practise the procedures for Rio at this airport.”

Schindlhof the last test before Rio
The Austrian Championships (July 2-3) at the Schindlhof will be the Austrian para team’s last major test before the Paralympics in Rio de Janeiro. “We are very happy that we may be guests besides all these top dressage riders in this beautiful ambience”, says reigning European champion Pepo Puch, who convinced on his black horse Fontainenoir at the international shows in Doha (QAT), Deauville (FRA), Waregem (BEL) and Mannheim (GER) with victories and podium places during the Paralympic season.
The close results of these international events prove that it won’t be easy to repeat the London performances. Puch: “The level has increased incredibly. Ever better dressage horses with international experience are entered in the para sport; and the riders are also ever improving. Consequently I am really very happy that we are capable of keeping up well with the top.“
Daniel Winkler / Übersetzung Ingeborg Kollbach 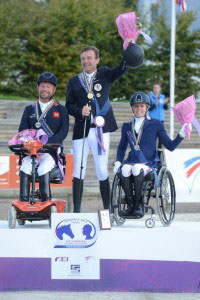 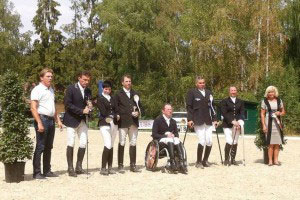