4 starts, 4 wins, plus the 4th overall victory in a row – more Werth is not possible! The Manfred & Hilde Swarovski Memorial Show, at its 25th anniversary, turned into a festival of Isabell Werth with record heat (38 degrees Celsius) and a record number of visitors (overall more than 6,000 dressage fans on 3 days).

Werth scored 81.78 percent with her 18-year-old experienced horse Don Johnson FRH on his farewell tour. “Thanks to Johnny. He did very well in the heat. That’s why we only did a short warm-up“ Isabell Werth was full of praise for your long-time sports partner.

The #1 of the dressage world was also full of praise for the organizers at Schindlhof, “Thanks to the entire family of Klaus and Evelyn Haim-Swarovski and the entire team at Schindlhof. Year after year, you manage to unite a familiar atmosphere with top sport.“

And, with a wink, she added, “I didn’t send a picture of myself home, otherwise they would have thought I was on holiday – it’s so beautiful here!“

The German triple victory was completed by Stefanie Schatz-Weihermüller with C’Est la Vie (76.9%) and Lisa Müller with Birkhof’s Dave (76.4%).

Austria’s dressage state champion Belinda Weinbauer followed immediately behind with Miss Auguste MJ as the best Austrian rider in 4th place with a strong score of 75.145 percent for a successful freestyle.

“This is a nice ending to a so-so weekend.“ Belinda Weinbauer was still annoyed about the big mistakes in the Grand Prix Special in which she was on the way to 72-73 percent with Fustanella OLD for a long time.

After the freestyle, the thumbs and the corners of the month of the athlete from Upper Austria that competes for Burgenland went up, “Auguste did a great job. This was only her third international test.“

Team mate Stefan Lehfellner presented a rocking freestyle with Fackeltanz OLD and was rewarded with 75.02 percent and 5th place. “I am very proud of Fackeltanz for being so correct and right in these temperatures. The mistakes that happened at the end of the test were my fault. I am very enthusiastic about this horse.“

Bella Rose with “much ‘go’ despite the heat“
In the previous event, the Grand Prix Special, it was once again Isabell Werth that excited everyone. The #1 in the world easily surpassed the 80-percent mark with her favorite mare Bella Rose and scored 81.511 percent even at 35 degrees Celsius.

But winning has not become routine for the six-time Olympic champion as she proved with her emotional words during the award ceremony in the dressage arena, “It is again and again moving for me how Bella returned to sport, it was a year ago here after 3 years of injury break. She showed a lot of ‘go‘ despite the heat. In this form, we’re looking forward and confidently moving on to Aachen and the European Championship in Rotterdam.“

Like in the Grand Prix, 2nd place was taken by Lisa Müller, who was visibly surprised by the performance of her 12-year-old Oldenburg gelding Stand By Me OLD: The score board showed 77.106 percent which was a new record score for the duo trained by Isabell Werth.

In the ORF interview, Lisa cheered together with her husband Thomas Müller, football world champion and equestrian fan, “We didn’t expect this score, we have absolutely nothing to complain about. For us, it is actually reward enough to be able to take part in this wonderful show in this incredible alpine scenery.“

Again, like in the Grand Prix, Christian Schumach was the best Austrian: He took 11th place with Sinclair Jason with 68.064 percent. The Carinthian praised his 11-year-old Oldenburg gelding, “Sinclair did a good job here and showed that one can rely on him.“ 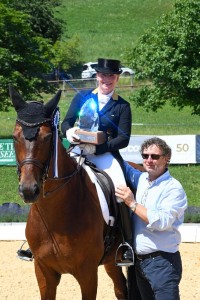