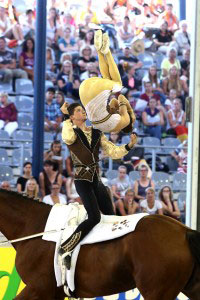 Double World and European champions, World Cup champions and bearer of the Golden Medal for Merits of the Republic of Austria. These are the greatest awards the duo Jasmin Lindner and Lukas Wacha, and their coach and lunger Klaus Haidacher can boast

Double World and European champions, World Cup champions and bearer of the Golden Medal for Merits of the Republic of Austria. These are the greatest awards the duo Jasmin Lindner and Lukas Wacha, and their coach and lunger Klaus Haidacher can boast.

The now 21-year-old student of mathematics and biology Jasmin Lindner from the Zillertal was just six years old when she began with the sport of vaulting. With her excellent body awareness and weighing just 17kg Jasmin then was already the topmost athlete in team Zillertal and attracted attention. She won her first championship medal in 2006; silver with the junior team. It turned out to be the start of a series of medals, as from then on until today she not only competed at all major events (World and European championships) but was on the podium every time; until 2010 in the team and as from 2011 in the Pas de Deux with Lukas Wacha. Jasmin Lindner is currently considered the most successful active female vaulting athlete.

Lukas Wacha, 28, has his roots in Salzburg, Elixhausen to be exact. He began vaulting at the age of nine and quickly developed great ambition. Tyrol offered the ideal training conditions for the physiotherapist, who moved there in 2007 and soon progressed. His priority was at first the individual event, in which Lukas represented Austria at World and European championships from 2001 to 2014 recording good results such as fourth place at the 2012 Worlds. In 2008 he celebrated his breakthrough with the team, including Jasmin Lindner. It was the first World Championship medal (silver) for both of them in the general class. After European gold (2009) and bronze (2010 WEG Kentucky) with the team Lukas and Jasmin competed in the pair event: 2011 European bronze, 2012 World champions, 2013 European champions, 2014 WEG winners, World Cup champions and finally 2015 European champions again at Aachen.

But they are only complete with Klaus Haidacher, their coach and lunger. Klaus, the head of the nationally and internationally successful vaulting group Pill, is indispensable for Jasmin and Lukas. They have established great confidence in the 48-year-old idealist during their long-time co-operation and many joint experiences.

The trio could reckon with the Czech crossbred horse Elliot until 2013. After many years in the intensive, international sport Elliot was allowed to retire. He was replaced by the large Dutch gelding Bram (1.92m hh) provided by German owner Philipp Langmann.
Lukas Wacha and Jasmin Lindner achieve acrobatic peak performances with their innovative free programmes amazing their audiences again and again. For instance they performed the legendary double handstand at the 2013 European Championships on home soil at Ebreichsdorf, a feat nobody considered possible. That’s why we may look forward to what the two perfectionists will come up with for 2016 (World Championships at Le Mans in August). 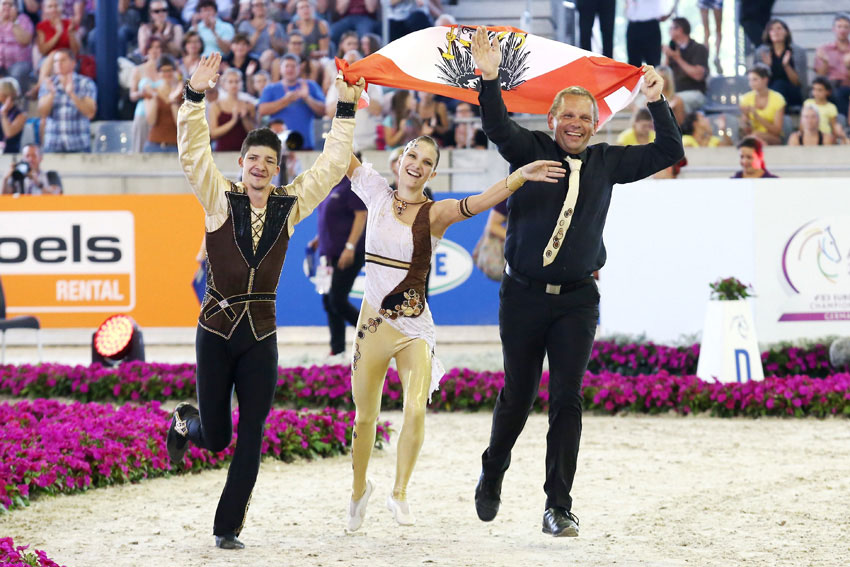