The best riders in the world “at home“ at Schindlhof

This year, from 28 to 30 June 2019, the Manfred & Hilde Swarovski Memorial Show, the international dressage show with four stars, is celebrating its 25th anniversary. During these days, Schindlhof in Fritzens, Tyrol, will become the second home of Olympic champions, world and European champions.

“Schindlhof offers a very relaxed, family environment for all four- and two-legged guests. The hosts Evelyn and Klaus provide optimal conditions here. That’s why I like coming here again and again!“ Isabell Werth, six-time Olympic champion, nine-time world champion, 17-time European champion, #1 in the FEI Dressage World Ranking and most successful dressage rider of all time is full of praise for the organizers Evelyn and Klaus Haim-Swarovski.

At this weekend, Isabell Werth will participate with her horses Bella Rose (current #2 of the FEI Dressage World Ranking) and Don Johnson FRH (#24). In addition to Werth, the German national coach Monica Theodorescu will bring a strong team including Olympic team champion Dorothee Schneider – who is also Evelyn Haim-Swarovski’s coach. Furthermore, Ingrid Klimke, who scored over 80 percent for the first time with Franziskus in the Freestyle at the Whitsun Show in Wiesbaden at the beginning of June, and Lisa Müller, the wife of football world champion and Bayern München star Thomas.

A total of 46 riders from 14 nations with 68 horses can be seen in three tours and seven tests. Many European teams will use the CDI4* at Schindlhof as a qualifying show for the upcoming European Championships in Rotterdam (NED, 19 to 25 August 2019). This is also true for the Austrian team, spearheaded by state champion Belinda Weinbauer, vice-champion Astrid Neumayer as well as Karoline Valenta and Christian Schumach, candidates for the European Championships.

As in previous years, the admission fees and voluntary donations are entirely charitable. They will be given, in equal measures, to an association that is dedicated to therapeutic riding and riding for people with disabilities and the Tyrolean association “Tugende Together“ that supports the education of children and adolescents in Uganda.

The Manfred & Hilde Swarovski Challenge Trophy will be presented to the most successful pair (percentages from GP and GP Special respectively GP and GP Freestyle will be added; the highest score from the Special Tour respectively Freestyle Tour wins) of the CDI4* Schindlhof. The winner may keep the valuable Swarovski crystal trophy for a year. A rider is only allowed to keep it for good after she/he has managed to win three times. In 2014, now 13-time Austrian State champion Victoria Max-Theurer was the first rider to achieve this. 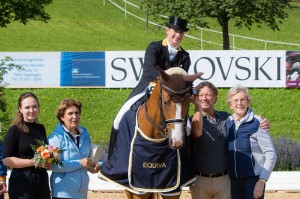