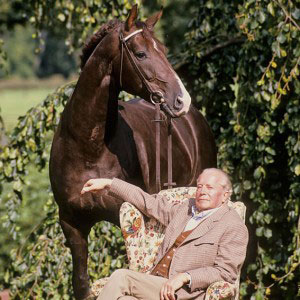 The former German patron, stud owner and entrepreneur Otto Schulte-Frohlinde would have celebrated his 100th birthday on February 12, 2016. However, his name will forever be associated with the chiliad stallion Donnerhall…

Alwin Schockemoehle says about him: “He was a Godsend for equestrian sport.” He means Otto Schulte-Frohlinde, called “Schufro”. They were intimate friends for 30 years up to the death of the entrepreneur in 1990. They first met at the 1956 Olympic Equestrian Games in Stockholm; “Schufro” was in the Swedish capital as a spectator, Schockemoehle and his buddy Reiner Klimke from joint training days at Warendorf for other reasons. They had qualified for the Olympics, Schockemoehle in eventing, Klimke in dressage. But in the German officials‘ opinion they were too inexperienced and so not included in the German team. Disgruntled, Klimke later switched to eventing, Schockemoehle to show-jumping.

Since Stockholm Schulte-Frohlinde supported Alwin Schockemoehle, 20 years his junior; they jointly owned several world-class horses: Donald Rex, possibly Schockemoehle’s best jumper ever, Rex The Robber, and then Warwick Rex. 40 years ago on July 27, the allegedly best show jumper of all times won individual Olympic gold on that Hanoverian horse at Bromont east of Montreal with zero faults in two rounds over altogether 14 oxers – all up to 2.20m wide(!) and between 1.50m and 1.70m high – a show of superiority then unknown. This feat made the church bells ring in the evening at his home town of Muehlen….

The toughest hours as Chairman

Otto Schulte-Frohlinde was born on the parental farm in Dortmund in 1916, as the third of four siblings. Horses played a big part in his youth, his social and economic rise began with the foundation of the company “Rex-Mineralölgesellschaft Paul Ziegler & Co”. He never disclaimed his peasant background. The oil and east-west trade made “Schufro“ rich. He moved to West Berlin in the 1960ties, where he soon maintained a tournament stable. He became the Chairman of the Berlin Equestrian Association and later head of the show jumping board of the German Olympic Committee for Equestrian Sports.

As Chairman of the show jumping board he faced his most sensitive task shortly before the 1972 Olympic Summer Games in Munich. On June 8, 1972 he received a telex with the message that eleven show jumpers were “irrevocably no longer willing to ride in an Olympic team together with Hans Guenter Winkler”. The rebels accused Winkler of gamesmanship, missed classification tournaments and having been unduly favoured by the German Federation and Neckermann’s Sports Aid Foundation.

The day after the German CHIO Schulte-Frohlinde was able to pour oil on troubled water in front of cameras at hotel Quellenhof in Aachen. Germany won the Nations Cup and thus the last gold medal of the 1972 Games in Munich with Winkler on Torphy, Fritz Ligges on Robin, Gerd Wiltfang on Askan and Hartwig Steenken on Simona.

In 1969 Otto Schulte-Frohlinde purchased the farm “Groenwohldhof” at Groenwohld, north-east of Hamburg in Schleswig-Holstein, designed for horse breeding and agriculture. When “Schufro” suffered a stroke at the age of 56 a few weeks after the Munich Olympics, his son Hendrik built an equestrian facility on the farm specific to his father’s needs. Son and Ulrike daughter both supported their father during those difficult years. The equestrian facility was inaugurated in1976. Karin and Herbert Rehbein from Hamburg were contracted as trainers. The Groenwohldhof turned into a flourishing centre of horse breeding and training within a few years.

A day in June 1981 proved Schulte-Frohlinde’s keen sense of horses, when stallion Donnerwetter on Groenwohldhof, at her heels a just nine-day-old chestnut foal. Stud manager Werner Stahl had the boss come. Schulte-Frohlinde saw the foal and immediately bought it by a handshake, as is usual in equestrian circles. The foal was Donnerhall, the eventual chiliad stallion with a double career as a stud and excellent dressage horse under Karin Rehbein. Donnerhall, who never left Groenwohldhof, died of bowel poisoning in 2002. He left behind 121 licensed stallions and 450 mares. The German dressage team that won silver at the 2012 Olympic Games in London – Helen Langehanenberg/Damon Hill, Kristina Sprehe/ Desperados and Dorothee Schneider/Diva Royal – all rode Donnerhall offspring. In the 2013 European Championships winning team at Herning, young Fabienne Luetkemeier on D’Agostino, also a Donnerhall offspring, replaced Dorothee Schneider.
Otto Schulte-Frohlinde died in 1990 at the age of 74. 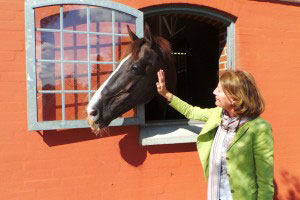