Brilliant return to the international stage
Will Dorothee Schneider again compete at the Olympics? 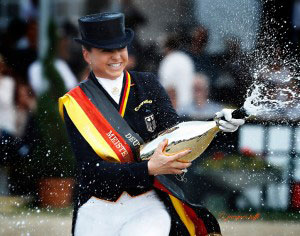 Dorothee Schneider experienced the happiness of a moment four years ago that led her into the sporting paradise. Together with Kristina Bröhring-Sprehe on Desperados and Helen Langehanenberg on Damon Hill she and Diva Royal were part of the German trio decorated with Olympic silver in London. After the Games Dorothee Schneider had to return Diva Royal to her owner according to the contract; these are the hard and often quite cold rules of the game for professionals. She didn’t grumble, she didn’t moan, she didn’t lament. Someone like her knows what she can do, and she had the Hanoverian gelding Showtime in her stable. She competed on the now ten-year-old Sandro Hit offspring at the German Championships at Balve and said afterwards: “I couldn’t even have dreamed of what I achieved here.” 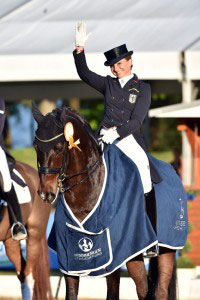 Of course Dorothee Schneider, 47, had not suddenly reappeared from nowhere. In dressage you have to work your way up, everything else would be a real miracle. In this, for many strange, world of order and discipline the horse is at the centre, it must appeal not only to the audience but also to the judges. And that happened with Showtime. Even the widely travelled, excellent judge Katrine Wuest went into rhapsodies about him: “Like a Tsunami.” The Munich-based German, a successful dressage rider herself in the past, drew even a total B mark of 95.0 percentage points, comparable with an almost “10” as top mark.

Showtime was discovered at the age of one and a half by riding instructor Bernd Gebhardt at breeder Heinrich Wecke, bought and built up slowly. The dark-brown presented himself as a promising talent at an early age. Gebhardt’s partner gave the horse the name Showtime due to his outstanding movements when running free indoors. At the age of four the gelding moved to Dorothee Schneider’s stables in the Rhineland Palatine. He is owned by Gabriele Kippert.

With Showtime “Doro” Schneider is back on the really big stage of dressage. At Balve, she first received silver in the Grand Prix Special, then she won not only gold in the Grand Prix Freestyle, but also her first ever national title. She has been nominated for the German team besides Isabell Werth, Kristina Broering-Sprehe and Soenke Rothenberger for the Official Tournament of Germany (CHIO)
in Aachen in mid-July – and with similar performances as at the German Championships the German Dressage Board can hardly overlook her for the Olympic Games in Rio after the CHIO… 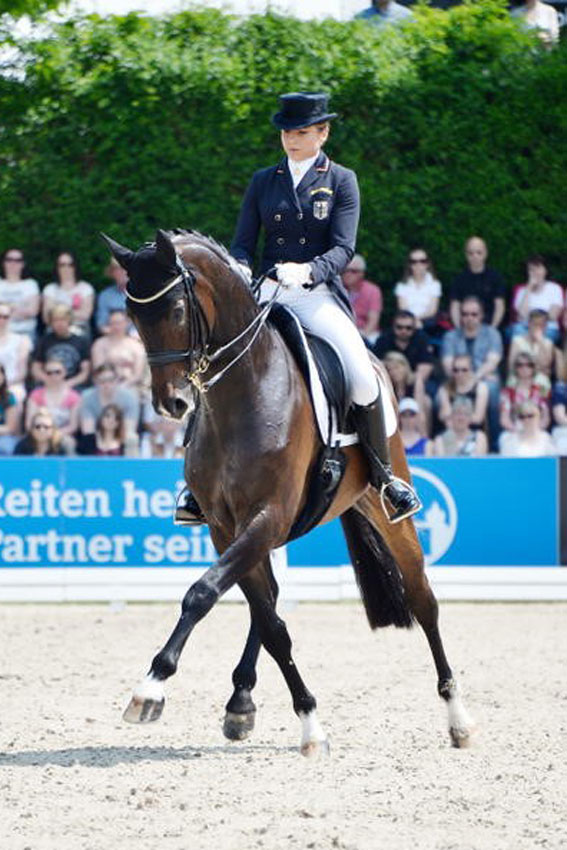